The Public Safety Subcommittee of the Joint Ways and Means Committee, the budgeting authority in the Legislature, held a week of hearings on HB 5013, the budget of the Oregon Judicial Department’s (OJD). Over the week of hearings, Chief Justice Balmer and OJD staff presented the department’s budget, the expected outcome of possible cuts to the current funding level, and their budget priorities. On the last day of testimony, the subcommittee heard public testimony from the Bar, the Citizens’ Campaign for Court Funding, the Oregon Trial Lawyers Association, the Oregon Association of Defense Counsel, the Oregon District Attorneys Association, the Oregon Criminal Defense Lawyers Association, and the Multnomah Bar Association among others. Thank you to Ed Harnden for traveling to the Capitol and testifying on behalf of the Bar and the Citizens’ Campaign for Court Funding in support of adequate funding for the Judicial Department.

OJD focused on funding for Oregon eCourt, an increase in judicial compensation, and updating court facilities as its main budget priorities. In addition, OJD described the outcomes of cutting its budget by 15 percent, 10 percent, and 5 percent.

The department is expected to return to the subcommittee for a second round of hearings later in the session.

With the implementation of Oregon eCourt complete, the project has moved to maintenance funding rather than implementation funding. Current funding sources are insufficient and OJD is facing an approximate $9 million deficit for the 2017 – 2019 biennium. During the OJD budget presentation, the proposed increases to filing fees, criminal fines and document access fees were shared with the subcommittee.

The increases to the civil filing fees and the criminal fines and assessments will need a statutory change while the user fees would be modified by an order of the Chief Justice. The details of the increase in user fees are under discussion.  Proposed amendments to HB 2795 and HB 2797, which implement these increases, are available on the legislature’s website under the bill numbers.

On March 28, the Public Defense Services Commission (PDSC) began its budget presentation to the Public Safety subcommittee of the Joint Ways and Means Committee. Adequate funding for PDSC is a Bar priority and Bar president, Michael Lavelle, submitted a letter of support on behalf of the Bar. In addition, Per Ramsfjord, chair of the PDSC and current BOG member, also testified in support of the budget.

The hearings on HB 5033, which lasted three days, focused on the 2017 – 2019 budget as well as priorities for PDSC. This budget cycle, the priorities include pay parity for public defenders, the increase in caseload, and the expansion of the parent-child representation pilot program.

The joint co-chair’s budget for PDSC includes a 3.5 percent reduction from current service level funding for OJD which is approximately a $10.6 million cut. 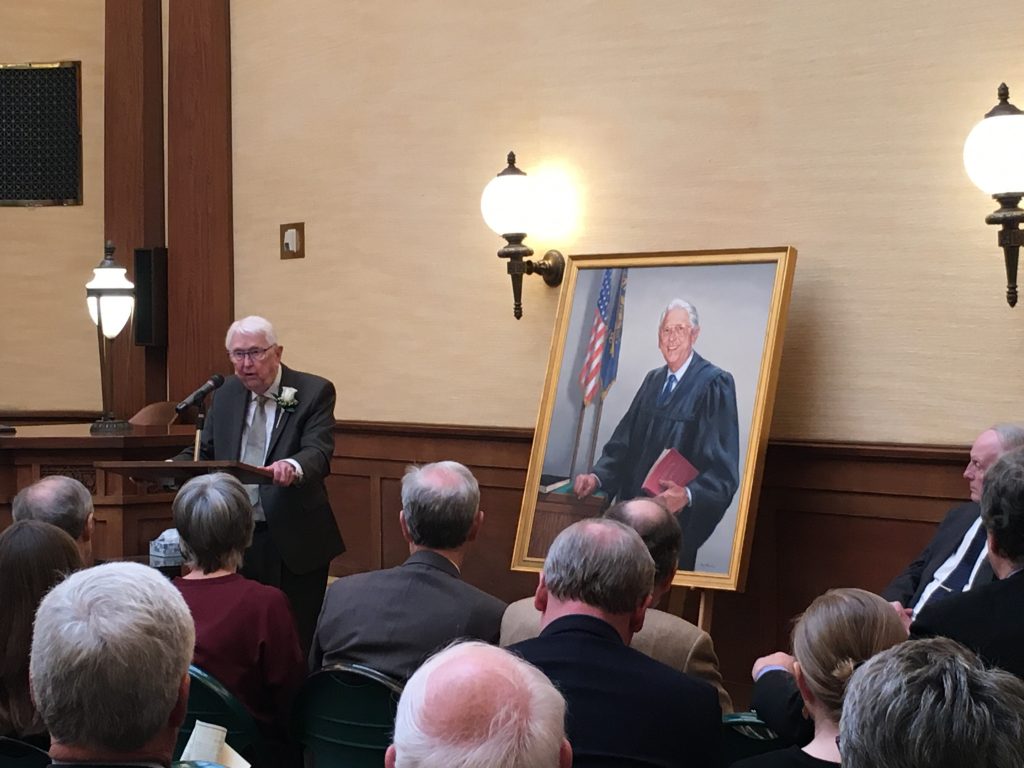 Chief Justice Peterson is perhaps best known for his leadership to combat bias in the judicial system and to ensure procedural fairness for all people involved in the court system.  In 1992, he was appointed to chair a task force investigating racial issues in the court system. The task force released its report, Report of the Oregon Supreme Court Task Force on Racial/Ethnic Issues in the Judicial System  in 1994 which found that racial bias existed in law enforcement and the court system. This report continues to be a touchstone and its recommendations and findings are still cited.

HB 2191 – Among other things, requires a person to obtain or renew a license from the Secretary of State in order to serve as a commercial registered agent in Oregon. The bill will have a work session on April 14.

SB 95 – Requires certain financial professionals to report suspected elder abuse. The bill passed out of the Senate Committee on Human Services and the Senate Judiciary Committee and is on its way to the Senate Floor.

SB 494 – Establishes the Advance Directive Rules Adoption Committee and updates statutory forms. The bill will have a work session on April 18.

SB 5535 – Sets the 2017 – 2019 budget for the Oregon Department of Revenue. The department’s budget went through four days of testimony in the General Government Subcommittee of the Joint Committee on Ways and Means.

Thank you for reading the Oregon State Bar’s CAPITOL INSIDER.
We hope you enjoy our new format. The archives are still available here.