This May, the legislature held a rare legislative special session scheduled to coincide with the previously scheduled Spring Legislative Days. On May 21, the Oregon Legislature met to modify tax treatment for some sole proprietorship. The special session, which was completed in one day, resulted in the passage of HB 4301. The bill, which passed with bipartisan support in both chambers, stemmed from legislation passed during the 2013 special session, recent changes to the federal tax code, and the passage of SB 1528 during the 2018 regular session.

After completion of the special session on May 21, the legislature returned to the previously scheduled legislative day’s schedule, including a joint meeting of the House and Senate Interim Judiciary Committees. On May 22, the committees met to discuss emerging issues and receive updates on work approved during the 2017 and 2018 legislative sessions. Topics included the sale of manufactured homes, the work of the Sixth Amendment Center with the Public Defense Services Commission, the criminal justice innovation program, and an update on testing Sexual Assault Forensic Evidence (SAFE) kits. To review the full agenda and supporting materials, please visit the Interim Judiciary Committee’s page on the Oregon Legislative Information System (OLIS).

The Oregon Law Commission (OLC) seeks public comment on the rules governing workplace harassment in the Capitol, and it will provide a forum for public testimony at 5 p.m. on July 19, 2018, in the Capitol building.

In February 2018, House Speaker Tina Kotek and Senate President Peter Courtney asked the OLC to review the legislature’s ability to discipline members of the legislature for misconduct and review laws and rules governing harassment between lobbyists, the public, elected members, and employees of the legislature. The OLC is charged with recommending improvements to create a harassment-free workplace in the Capitol, including recommending changes to laws, policies, and the Oregon Constitution.

In response to the charge, the OLC constituted a work group (the Oregon State Capitol Workplace Harassment Work Group) chaired by Miller Nash Graham & Dunn employment attorney P.K. Runkles-Pearson. The group’s work is ongoing through the remainder of 2018 and updates will be posted on its website, which will also include a portal for written comment.

2019 Section Legislative Package Adopted by Board of Governors

The OSB’s Law Improvement Program is intended to include proposed legislation from sections, workgroups, and committees that clarify statutory ambiguities, remove unnecessary procedural requirements, modify unforeseen glitches in previous legislation, or otherwise improve the administration of justice. Policy changes are also included in the bar package of legislation when deemed appropriate. For a legislative concept to be considered at the BOG’s Legislative Forum, it must be approved by a majority of the section executive committee, and executive committee members are encouraged to be representative of the diverse views of the section. Bar groups are encouraged to be mindful of differing viewpoints in the practice area.

Agency Representation Standards Adopted by Board of Governors

On May 18, the BOG adopted Standards of Practice for Attorneys Representing the Child Welfare Agency. These new standards came about as a result of SB 222, passed during the 2015 Oregon Legislative Session, which created a task force charged with recommending models of legal representation in juvenile dependency proceedings. The Oregon Task Force on Dependency Representation, staffed by the Governor’s office, convened in 2015 and 2016 and issued its final report in July 2016. That report made a number of recommendations for improving services in juvenile dependency proceedings—including the creation of these new performance standards for agency attorneys.

Thank you to the Agency Standards work group, chaired by Joanne Southey, for the hard work over the last few years creating these performance standards.

During four days of meetings, the Oregon delegation met with Senators Merkley and Wyden and Representatives Blumenauer, Bonamici, DeFazio, Schrader, and Walden. 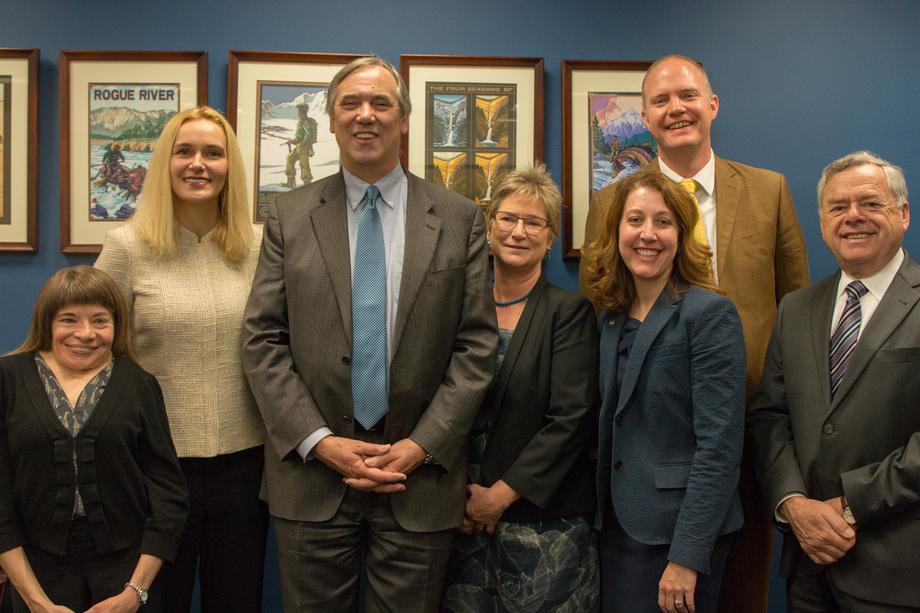 Practice Tip: When does a bill become a law? Effective Dates and Operative Dates

In Oregon, the default effective date for a bill is January 1 of the following year. A bill passed during the 2018 Legislative Session, without a specifically noted effective date in the text of the legislation, will have an effective date of January 1, 2019.

Some bills, many of them from the legislature’s budget committee, the Joint Ways and Means Committee, will have an emergency clause. An emergency clause makes the bill effective upon passage, that is, when either the Governor signs the bill or 30 days pass since the end of session and the bill was not vetoed.

The fourth option is to have a specific date identified within the text of the bill. In some circumstances, different sections of a bill will have different effective dates. In addition, a bill may have both an effective date and an operative date. This can happen when a bill requires administrative action such as rulemaking to implement the bill before the bill takes effect.

The effective date for each bill will be listed in OLIS once it is signed or deemed signed. However, do not neglect to review the bill text for additional effective dates or operative dates.