On September 19, at the request of State Senator Floyd Prozanski (Eugene), Judge Chris Garrett of the Oregon Court of Appeals and Amber Hollister, General Counsel of the Oregon State Bar, attended the Joint Interim Judiciary Committee meeting to present the findings of the OSB Futures Task Force. After a brief overview of the report’s key recommendations, legislators discussed the possible implementation of online court forms and possible cost savings, HB 4128 (2016), which addressed notario fraud in Oregon, and self-navigators (people representing themselves). 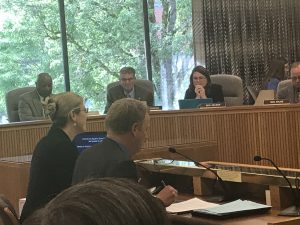 Additional information on the recommendations of the Futures Task Force will be provided on September 29 at the Oregon State Bar. The CLE, which will provide two ethics credits, is entitled Leading the Way: The Future of Referral Fee Sharing and In-Person Advertising and will explore the proposed changes to Oregon Rules of Professional Conduct 5.4 and 7.3. Registration information can be found here.

CLEs at the Capitol return during Fall Legislative Days

After a hiatus during the 2017 legislative session, CLEs have returned to the Capitol. On September 20, the Oregon State Bar and the Interim Senate Judiciary Committee sponsored a CLE on mandatory elder abuse reporting. Daniel Norris, Elder Abuse Resources Prosecutor for the Oregon Department of Justice, and Mark Johnson Roberts, Deputy General Counsel of the Oregon State Bar, presented over the lunch hour to approximately 25 lawyers. Over the course of an hour, the presenters discussed the work of the elder abuse prosecutor and his team of investigators, the types of abuse seen in Oregon, and a lawyer’s reporting requirements.

The next CLE, addressing Procedural Fairness in the Judicial System, will be on November 14, from 11:30 a.m. to 12:30 p.m. Judge Nan Waller, Presiding Judge of Multnomah County, will present a one-hour CLE at the Oregon State Capitol in Hearing Room C.

A number of bills, usually revenue bills have an effective date of October 6, 2017.

Finally, a fourth option is to have a specific effective date identified within the text of the bill.

Please note that in some circumstances, different sections of a bill will have different effective dates.

Of the 698 bills enacted in Oregon this year, 356—or 51 percent—will go into effect before January 1, 2018. This number is inflated by many budget and tax bills, which generally need to go into effect at a specific time to keep state programs functioning. However, even among “policy bills,” many will take effect before the January 1 default date. For example, about 31 percent of criminal law legislation, 43 percent of labor-and-employment-related bills, and over half of health law and administrative law bills will go into effect at some point during 2017.

Thank you to all the volunteers who tracked legislation, submitted feedback, drafted chapters, and edited the 2017 Oregon Legislation Highlights. Without your hard work, publication of this legislative guide would not have been possible.

OJD has cancelled the scheduled upgrade to its appellate software, which was scheduled to begin today (September 29) at 5 p.m. and last through the weekend. As a result, there will be no interruption in service to Appellate eFiling or remote access to appellate court information. All services and systems will continue normal operation and availability.